In Honour of Sir Alex Ferguson

Share All sharing options for: In Honour of Sir Alex Ferguson 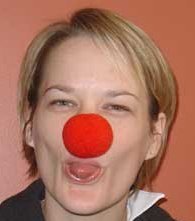 Now come on!!! Did you really think I would publish a picture of SAF on this site. You are joking me!!! I prefer the blonde with her tongue sticking out.... anyday!!!!

Its RED NOSE day, nothing more appropriate to honour the 'great' SAF, on this day where millions of Britons go mental to try and raise as much money as they can for the poor suffering folk on the continent of Africa.

But a word of caution. Before you dig deep into your pockets, wallets and purses consider this thought?!?!? If South Africa CAN afford to host the 2010 World Cup, why are millions of Britons going mental in trying to raise money for RED NOSE DAY or REALLY is it called Sir Alex Ferguson 'RED NOSE' Day???

Chelsea's attempts to chase down the Ure of Man Utd takes another twist on Saturday when they take on Neil Warnock's Sheff Utd at Stamford Bridge. 48 hours later, the mighty Blues travel to Spurs for a replay in the FA Cup.

A couple of hours earlier on Saturday (fortune favours the TV companies, unless you live in a time zone of beyond five hours), ManUre would have played their league game against Bolton at OT and would have started THEIR preparations for their Monday evening cup-tie in earnest.

Give me a Chelsea win, a ManUre defeat and a Chelsea Premiership title win and you can eat me for breakfast!!!