Whats Up This Week

Share All sharing options for: Whats Up This Week 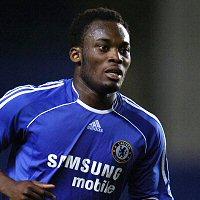 I am still spinning from yesterday's mega cup-tie at The Bridge and I don't think yesterday's action will be forgotten too quickly.

For others I am sorry to report that there were major clashes between supporters of both clubs after the game and over 30 people were arrested and several treated for stab wounds.

But what's up this week. Subject to obtaining coverage, I hope to LIVE blog the reserve game between Chelsea and West Ham on Tuesday.

On Wednesday, Chelsea travel to the City of Manchester stadium to play Man City, a game that Chelsea JUST HAVE to win to keep up the pressure on Man Utd in the race for the Premiership.

On Saturday Chelsea entertain Sheff Utd in the Premiership at Stamford Bridge, two days later on the 19th March we replay in the FA Cup against Tottenham at White Hart Lane.

Today Michael Essien signed a new five year contract which will keep him at the club until 2012. All that needs to be sorted out are the contracts of John Terry and Frank Lampard.

Did you spot Jose in Spain yesterday watching Valencia? Yep he was there. No sooner had he finished his business at Stamford Bridge, he was on a plane to Spain to watch last night's La Liga match between Osasuna and Valencia. The match ended 1-1 and Morientes equalised for Valencia deep into injury-time.