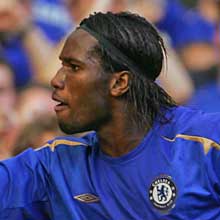 If winning the Carling Cup becomes Chelsea's only reward this season, it will not be for the want of trying. There are still three competitions for Jose's men to fight for: Premiership, FA Cup and Champions League but to end up only with the 'junior' trophy of the quartet will seem to be unfair with all the trouble, injuries, shake-ups that the club, the team and the fans have had to endure this season.

Let's not take anything away from the current Premiership leaders, Man Utd. Over the last two seasons when Chelsea won the Premiership title, Man Utd witnessed how high the bar became raised. This season Man Utd have raised that same bar even higher. Nine points clear at the top of the tree - Chelsea in second place with a game in hand but for Chelsea to be in this position in nothing short of sensational!!!

As for the rest and the rest is the rest, apart from Liverpool and Arsenal, Liverpool flatter to deceive and Arsenal prefer to play teachers and kids

Remember in October 2006 when Chelsea lost two goalkeepers in one match. One goalkeeper, Czech International and 'World's No.1, Petr Cech has recently returned and kept SIX clean sheets in his last nine matches. Carlo Cudicini, our automatic number two, for whatever reason hasn't featured at all since he was injured in the same match.

Remember in December 2006 when inspirational Captain John Terry got injured and did not return to action until recently when he made a late substitute appearance at Charlton. Then his first full start against Porto in the Champions League ended abruptly when he damaged his ankle.

Remember the January 2007 transfer window. Chelsea didn't sign anybody and Jose had to keep relying on Michael Essien to fulfil Terry's centre-half role and with Khalid Boulahrouz seemingly becoming more injury-prone all it needed to send Chelsea into a serious 'crisis' was to lose the services of Carvalho. This did happen in the 2-0 defeat at Liverpool when Essien and Paulo Ferreira were paired at the back to face the might of Crouch and Kuyt.

Chelsea's other long term casualty has been Joe Cole and Arjen Robben hasn't helped the situation by dropping out of the team with numerous injury niggles.

Then just when you thought that the bad situations were beginning to turn themselves back into good situations, Ashley Cole damaged knee ligaments in a recent Premiership game against Blackburn.

However there is positives emerging through the negatives. Lassana Diarra looks as if has made the problematic right-back spot his own. I always thought that Geremi would grab the opportunity and despite some 'self-discipline' problems, Diarra has produced some encouraging displays that could suggest he will become Jose's main man.

Obi Mikel is starting to produce the form that interested Chelsea in the first place, although his temperment leaves a lot to be desired. Kalou tries his best when selected and his rewards have been a couple of goals.

Andriy Shevchenko has started to score the goals that everybody has been waiting for and his work rate for the team ethic has been nothing short of sensational, and for those with extremely short memories, look how long it took for Didier Drogba to settle in and NOW look at the job Didier Drogba is doing for the team this season.