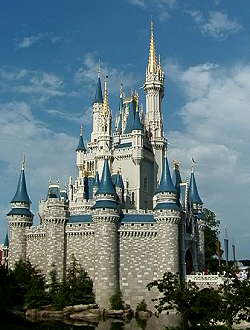 You are probably wondering why I have used a picture of Cinderella's castle at Disney's Magic Kingdom in this article. Well all will be revealed shortly.

Firstly Chelsea beat Norwich City at Stamford Bridge in the FA Cup and I have to admit the 4-0 scoreline does 'flatter' the Blues somewhat. It was good to see SWP and 'The Shev,' get on the scoresheet, plus Didier Drogba further enhancing his reputation with another goal to add to his already impressive tally for the season, 26 in all competitions. For the recors Michael Essien scored Chelsea's third.

So what has Cinderella's castle got to do with Chelsea. Well not content with joining forces with YouTube it appears that Chelsea are in advanced negotiations with Walt Disney to form a multi-million partnership to further brand the Chelsea name.

Part of the initial deal will allow Disney owned ESPN, full rights to cover Chelsea's tour to the US in the Summer and with the tour set to feature a mini-tournament involving David Beckham's LA Galaxy, then there is 'gold in them there hills'.

Simon Greenberg who is Chelsea's Head of Communications said, "We are in talks with a number of major International companies about developing the Chelsea brand around the world."

So then. No comments about Chelsea being a 'Mickey Mouse' club LOL LOL LOL!!