Share All sharing options for: I Liked Claudio Ranieri 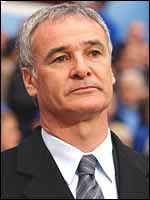 I liked Claudio Ranieri. OK he didn't win a trophy for Chelsea in his tenure at Stamford Bridge, but he was one of the few managers that gave us a win at Highbury. You know the game, the one where Chelsea won 2-1 in the Champions League Quarter-final with Wayne Bridge scoring the very dramatic and late winner in front of the hordes of Blue and White at the Clock End of the Highbury ground.

I liked Claudio Ranieri. Claudio got us to the Champions League and almost got us to the final except for his strange decisions and tactics in the semi-final 1st leg against Monaco in Monte Carlo.

I liked Claudio Ranieri. In his first game in charge for Chelsea against Man Utd, he witnessed his side trailing 3-1 at half-time, fight back in the second-half to draw 3-3. In the following season 2001/02 he took Chelsea to Old Trafford again and trounched the Red Devils 3-0.

I liked Claudio Ranieri. His tactics and decisions were strange and belied belief at most times, but in saying that Chelsea played attractive and attacking football and were unlucky in their quest for trophies.

I liked Claudio Ranieri. Unfairly dubbed 'The Tinkerman.' Surely it is a manager's right and choice to play players in the positions he thinks best and surely it is the manager's right to drop and rest players if he thinks they are not doing their best for the team. Look at Benitez at Liverpool. How many players has he used in his quest for glory? Has he been labelled?

I liked Claudio Ranieri. Given the chance could he have taken Chelsea on to Premiership glory had he not been replaced by Jose? Ranieri throughout his final season at Stamford Bridge, conducted himself with dignity, integrity and never allowed himself to be drawn in to the rumour mill of gossip that he would lose his job to Jose come the end of the 2003 season.

And now Claudio is back in football, back in work in his homeland with Parma who are struggling at the bottom of Serie A.