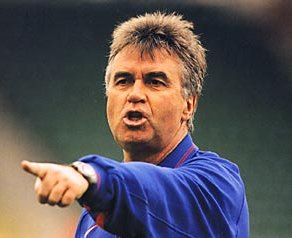 Gus Hiddink the man publicly louded by the media and press as Chelsea's new manager when Jose quits in the Summer is facing 10 months jail in Holland for tax evasion charges.

Hiddink today has said that despite the allegations he is not interested in becoming Chelsea manager. Strange really considering that Jose Mourinho has said that he will see out his contract.

Hiddink said, "I have not spoken to Roman Abramovich about moving to Chelsea this Summer. I am the Russian national coach and will continue in that job until the Summer of 2008.

"I am satisfied with my current job and very busy at the moment. I have other things to concentrate on. How do you think it would go down if I were to leave this job after a year and join Chelsea?"

Well Gus. If you go to jail, you will be leaving the Russian job anyway!!!!