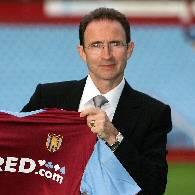 There was nothing 'lagerish' about Chelsea's performance in last night's Carling Cup tie against Aston Villa at Stamford Bridge. The performance was more 'vintage sparkling champagne' and the result helped to wipe away the 'bitter' defeat by Tottenham on Sunday.

Even Villa's manager Martin O'Neill was quick to praise Jose and the boys. O'Neill said "Chelsea are the strongest team in football. There's nothing wrong with being strong - they can play too. They have a lost of class players.

"Chelsea were much better than us. They were really excellent, particularly in the second half, and we were unable to cope with them."

High praise indeed from a man who is not short on a few critical words himself, and other managers take note!! O'Neill could have easily blamed the unfortunate injuries to Gareth Barry and Martin Laursen as reasons for Villa's defeat, he chose not although it must have been extremely difficult to keep quiet.

Villa kept Chelsea at bay for thirty minutes helped by the roar of 6,000 Villa fans in Chelsea's Shed End and then from a Ballack cross Super Frank glanced a header across Sorensen and although Sorensen got a hand to the ball he helped its path into the net.

Chelsea was led superbly by Essien, Lampard (captain for the night), Shevchenko and Drogba. Each had their roles to play and each got on to the scoresheet.

Chelsea's second came from a Shevchenko header from a Lampard cross, Essien after a surging run and one-two with right-back Geremi toe-poked in number three and then a couple of minutes later, Didier hammered home number four.