What is it with American's and the Name RANDY??

Share All sharing options for: What is it with American's and the Name RANDY?? 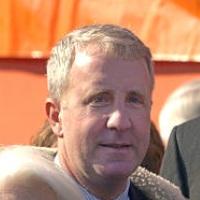 What is it with American parents naming their offspring Randy? Have American parents no conception on the meaning of the word or name Randy? But in the case of Mr Randy Lerner the new chairman of Aston Villa Football Club, obviously not. Hasn't he done well?

I wanna know did he 'learn' to be Randy, or did that come naturally? LOL LOL!!

His money has ousted the old cantankerous git in Doug Ellis and now probably to win over the Villa fans, he has paid for 6,000 of them to travel to Stamford Bridge this evening for tonight's Carling Cup 4th Round tie.

Talking of chairman. Wouldn't it be nice for Mr A to put his hand in his pocket and fund a couple of trips for the away fans. Say like for example Man Utd on the 26th November and then Wedesday 29th November at Bolton.

And before you kick-off about the mega mega money that Mr A has spent already on Chelsea Football Club, why not make the token gesture to the fans who spend their money following Chelsea away?!?!

Its ok spending a few quid of 35,000 flags to increase the atmosphere for the Barcelona game and being involved in the organisation of the Blue Flag returning to the Bridge, but come on Mr A - pay for an away trip or two or three. Chelsea fans have enough to fork out and have forked out enough already!!!