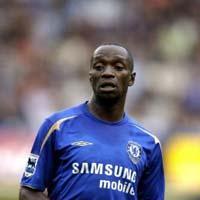 After the game against Barcelona at Stamford Bridge you would think that Khalid Boulahrouz could do nothing wrong.

After all he did mark Ronaldinho out of the game and Chelsea won 1-0. In the next match against Barcelona his performance was totally the opposite especially for Barca's second goal scored by Eidur.

On Sunday afternoon against Tottenham Hotspur, Boulharouz was relegated to the subs bench and in his place Jose decided to play Ferreira at right-back.

Now giving exception to the free-kick that Paulo (which Paulo got booked) conceded that led to Tottenham's equaliser, I could see nothing that Paulo did wrong. Paulo is a honest, no-nonense fullback, gives his all and takes no offence for any stick that is dished out to him by the opposition.

Paulo's punishment. Substituted at half-time with the score at 1-1 and Khalid comes on in his place. Minutes after the second-half re-start Boulahrouz gets skinned by Tottenham's 'old-man' Robbie Keane and Tottenham score to go 2-1 in front through youngster Aaron Lennon who I have admired since he rinsed through Chelsea Reserves defences for Tottenham Reserves about 13 months ago.

After the Champions went ahead through a Claude Makelele 'real special,' the Champions found themselves behind for the first time in the League since the defeat at Middlesbrough at the start of the season.

Even though Lennon had put Tottenham ahead early in the second-half, the game was retrievable for the Champions except that the 'Special One' wanted to make the Champions cause that more difficult.
The Special One substituted Shaun Wright Phillips for Claude Makelele and then brought on Kalou for Boulahrouz.

If you look at the video, Didier was skinned by Michael Dawson, who scored the goal as the cross came in from Jenas!!

Once Chelsea had John Terry sent off for a second bookable offence although it looked like JT had done well to restrain himself after being shoved around by a couple of Tottenham players in their own area, Chelsea's cause along with JM's decisions looked even more unretrievable.

Although Tottenham was deserving of their victory, their first in the League for SIXTEEN years against Chelsea, I can't help thinking the Jose tactics and substition decisions played a major factor in their win.

If there is any consolation in Chelsea's defeat, at least Arsenal got beat and the Whinger showed his REAL true sportsmanship!!!!
I can't wait to see if the Whinger gets the same publicity as Jose would if Jose had acted in the same way.