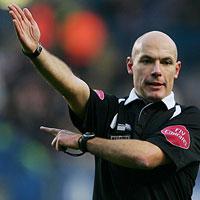 So Graham Poll doesn't get to ref Man U v Chelsea, Howard Webb does and it seems that both SAF and Jose are happy with the decision. It looks like both Michael Ballack and Didier Drogba will play despite injuries they received in midweek against Werder in the Champions League and with John Terry suffering from a family crisis - in that his Mother suffered a heart attack, get well soon Mrs T - JT will be there to lead the Blue boys to hopefully their BEST ever result at Old Trafford in recent memory.

And Emirates XI lost AGAIN 3-1 at their nemesis, the Reebok Stadium the home of Bolton Wanderers.

There are not many professional football clubs that can boast a record of achievement that Chelsea can in meetings with Salford Utd/Man Ure/Man Utd at Old Trafford.

Going back in time and exploring the history of matches between the two clubs (and Chelsea has no history BIG DIG), of 72 clashes, Man Utd has won 31 and Chelsea has remained unbeaten in the other 41 of those matches, winning 18 of them.

I have only been to Old Trafford once to watch Chelsea play the home team and that was way back in Sept 1977 when I was a mere whippersnapper. If memory serves me right, my trip to Old Trafford came not long after the legend that was - Marc Bolan, T-Rex - tragically died in a car crash in SW London.

In the away end staring straight down the vociferous Stretford End, the lanky 6ft plus Bill Garner scored the only goal of the game after ninety seconds and from then on in, Chelsea defended the hordes of attacking Reds like John Wayne defended the Alamo and Michael Caine defended Rorke's drift in the film Zulu.

Remember Claudio Ranieri's first game in charge for Chelsea which came at Old Trafford in Sept 2002. A stunning strike from Jimmy Floyd Hasselbaink and two from Tore Andre Flo and the game included the remarkable goal-line clearance from Graeme Le Saux, then the following season Chelsea returned to Old Trafford and won 3-0. Jimmy scored one and Eidur got the other two.

Chelsea's last victory at Old Trafford came after the title was lifted for the first time. Remember Tiago's stunner after Man Utd took an early lead and remember when the stands were almost empty when the Red Devils completed their end of season lap of honour???? In that same season Chelsea won 2-1 in the 2nd leg of the League Cup semi-final which was to become Jose first major trophy for Chelsea.

Last season was a different kettle of fish. A Darren Fletcher goal was enough to seal a 1-0 League win for Utd, but it wasn't enough to stop Chelsea claiming their second title in successive years.

Surprising to me was the amount of ManUre fans admitting that Fletcher's goal was a fluke. No doubt trying to take a sample of urine. But didn't Chelsea do that on Saturday 29th April when Chelsea's 2nd title was won, beating ManUre at the Bridge 3-0.