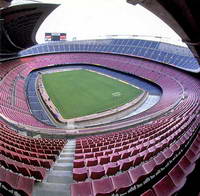 No!! Don't worry I haven't slit my throat (shame I hear a few of you whisper), after last night's defeat against Werder in Bremen. I wish I could say that I was on the sauce all day, celebrating the fact that Barcelona, the reigning Champions of the Champions League, could in the first time of the Champions League competition, be the first holders to play in the UEFA Cup.

Now isn't that possibility worth sinking a few beers or four? And to help you lot across the 'pond' celebrate Thanksgiving Day?

Any excuse for a day off work!!!

But even that prospect couldn't be achieved simply because the four letter word called WORK got in the way.

Anyway Chelsea lost in Bremen last night and I am not even going to go there about the goal that won it for Bremen, or at least the free-kick that was awarded that led to the corner that led to the goal. What's the point? It's not going to change the result and UEFA aren't going to get rid of the ref, so I will just look forward to Sunday and the showdown with ManUre.

From a difficult group and after five matches, Chelsea has qualified for the last 16 knockout stage. A win over Levski in two weeks will see The Blues win the Group and who would have seriously thought that would happen when the draw was first made.

Just bring on ManUre on Sunday.