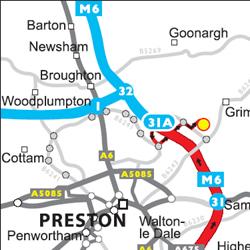 I am writing this whilst tucking into a hearty pre-match breakfast of Eggs, Bacon, Sausages, Baked Beans, Hash Browns, Fried Bread and Toast and before you ask no tomatoes cos I don't like them, before setting off to the 'Home of Football' and the 'Home of the Champions' for the Premiership match against West Ham United.

I am writing this now because for the last couple of days I have been on the road for work. South to Worcester, North to Preston and returning home via Stoke Leicester in the Midlands and on my journey I encountered more football grounds to add to my list that I have seen whilst zooming around in a 7.5ton lorry - zooming to a max of 65 mph that is, cos that is all you are allowed to do.

If you are a seasoned traveller up and down the M6 you always see Walsall's Bescot Stadium, near enough next door the the RAC Control Centre (unless of course you use the M6 toll) and if you continue down you can see the extremely high front of Villa Park. On this occasion because of my route - planned out by the AA - after leaving Worcester I only viewed the Bescot (for the umpteenth time).

Whilst in Worcester though I caught sight of the NCN club's ground at St George's Lane and heading to the M5 you can see the City's very impressive Rugby Club complex at Sixways, Pershore Lane, home of Worcester Warriors.

The next ground to be spotted was Bamber Bridge FC who play in the Unibond League Division One. From what I could see (as it was dark) the ground looks extremely compact and tidy with two stands either side of the ground. I couldn't tell if their were seats behind the goals.

Next up was Championship pace-setters Preston North End at Deepdale, followed by the impressive home of Stoke City at the Britannia Stadium, sitting proud at the top of a peninsula overlooking the A50.

Lastly two for the price of one in Leicester. Firstly the Walkers Stadium and then not a stone's throw away on Leicester's one-way system, Welford Road, the home of Leicester Tigers Rugby club. I know there have been occasions where both clubs have played at home on the same day, I seriously don't know how the City of Leicester copes!!!

On today's game Chelsea need a win to keep the pressure on Man Ure, especially with the match at Old Trafford coming up in just eight days time. Holland on Wednesday night revealed a real dark secret when Arjen Robben launched an Ian Hutchinsonesque long throw which led to the Dutch's equaliser against England.

Same again today Robbo if you get the chance.