Share All sharing options for: Your Choice of Right-Back - Ferreira, Boulahrouz or Geremi? 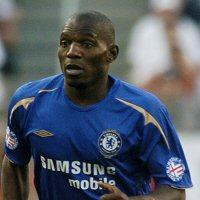 Since Glenn Johnson left to join Portsmouth on a season long loan, and Willie G departed to Emirates XI (Willie G can and has played at right-back) Jose and Chelsea have struggled to fill what could be described as a 'vacant' right-back position, although you could say the position for the last two years was Paulo Ferreira's.

But since the start of the season Paulo has struggled with injury and when he has played he hasn't been at his best. Take the defeat at Tottenham for example. Paulo gave away the free-kick which led to Tottenham's equaliser (and got booked) and then was replaced at half-time by Khalid Boulahrouz.

Khalid was subbed himself twenty minutes or so into the second-half. His crime? Unable to deal with the cross that led to Aaron Lennon's goal and ultimately Tottenham's winner and Chelsea's second league defeat of the season.

I am not having a go at these players. Paulo has been outstanding for Chelsea, Geremi, when he gets a chance does his best, only because his chances are limited and although Khalid was magnificent against Ronaldinho and Barcelona at Stamford Bridge, his head may have swelled a bit and therefore his subsequent performances have suffered.

Against Aston Villa in the Carling Cup, Geremi was brought into the right-back spot and Khalid was shifted to centre-half (only because of JTs suspension, following his ludicrous sending off at White Hart Lane) and Paulo was nowhere to be seen.

Against Watford on Saturday the smiley happy Cameroonian kept his place and played his second ninety minutes in quick succession and was instrumental in two of Chelsea's goals. The first, a cross in the first-half which Didier stroked home after the ball deceived Andriy and his second contribution saw Didier stroke home his third goal and complete his second hat-trick of the season (his first at Stamford Bridge).

Although Boulahrouz was an unused sub against Watford, Paulo was nowhere to be seen.

When you play at right-back for two consecutive games and your team scores eight goals without conceding and you have assisted in three of those goals, I think I know who I would want at right-back.