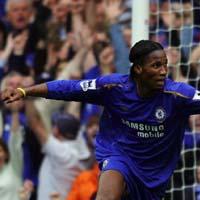 You know it is a sobering thought watching a football match. Four days earlier Chelsea bumped off Aston Villa in the Carling Cup 4-0 and Villa's manager Martin O'Neill was truthful in his post-match interview that Chelsea fully deserved their win and not once did O'Neill use any excuse that losing Barry and Laursen in quick-time either side of half-time was a contributing factor to Villa's demise.

I woke up this morning thinking that due to Watford's recent unbeaten run, Chelsea would have to play at their best, but in total honesty Chelsea didn't have to and without disrespecting Watford Football Club and their manager Adie Boothroyd (apart from his Italian Mafia dress sense) Watford didn't make Chelsea play their best because Chelsea didn't have too.

Once the first goal went in after twenty-seven minutes, Chelsea scored another three in forty-two minutes. Three to Drogba and one to Shevchenko. Eight goals in few days - Four to Dids and Two to Shev, watch out Man Ure!!!!

Didier Drogba. What a change in a player. His first hat-trick at home scoring his 12th, 13th and 14th goals of the season, his 6th, 7th and 8th of the Premiership season and The Shev, two in a matter of days, times are looking extremely good for Chelsea Football Club with on TWO weeks away to the clash of the season so far when Chelsea take on the Ure of ManUre.

Drogba's all round game has changed. Since the news that the Shev was finally on his way to the Blues last season, Didier has cut out all the histrionics of his game, defended better, attacked brilliantly and scored some important and some sensational goals - remember Liverpool and Barcelona!!

And of course the Sheva's goal was standard as well - and he came to my side of the stadium after he scored Chelsea's third.

Adie Boothroyd's reaction “We were not unlucky. They were far better than us and we got what we deserved. They are an exceptional team, they were terrific today.”

And with those words - Boothroyd said it all for me!