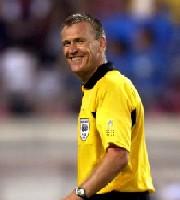 To continue on from our 'mummy' site The Offside, there is news breaking that Graham Poll maybe dropped from refereeing the Man Utd v Chelsea game on Sunday 26th November.

Graham Poll has lost the plot. To disallow a Didier Drogba goal against Tottenham on Sunday for no apparent reason is not acceptable, but if you remember last season's FA Cup Semi-Final against Liverpool, he did the exact same thing, disallowed a Didier Drogba goal for no apparent reason. Also he gave Liverpool a free-kick against John Terry, which Liverpool scored from, and back to last Sunday he sent John Terry off for a nothing challenge and then ignored the shoves on John Terry by TWO Tottenham players as JT was making his way back into position, before the red card was issued.

So if anybody was thinking that Graham Poll lost the plot in the World Cup when he booked the same person THREE times without showing a red card, he lost it way before then.

At least SAF has equalled his criticism by announcing to the media that he is 'disgusted' with Arsenal's Arsene Wenger's behaviour at West Ham last weekend.