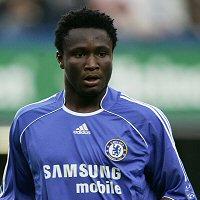 The Reserves return to action tonight after a two-week break with a home game against West Ham United at The Rec, Aldershot Town FC. The game kicks off at 7pm and I will try to bring you score updates as fast as I can.

This writer doesn't believe in bringing you news of the first team only. Chelsea Football Club is A Club and has many teams including the lovely Ladies. And through this wonderful OFFSIDE family, I plan to bring you as much news as I can on the ups and downs of Chelsea Football Club.

Not too many downs at the moment, but when you have been supporting Chelsea Football Club for as long as I have, I am entitled to brag, glow and perhaps have a 'little bit' of the 'Special One' about me LOL LOL!!!

Chelsea's team includes Jon Obi Mikel who hasn't travelled with the first team to Barcelona and West Ham's line-up includes one of the Argentinian 'superstars,' 22 year old Javier Mascherano. Mascherano was on the bench for West Ham as they beat Blackburn 2-1 yesterday.

First team squad member, Nuno Morais is included in the starting line-up as Michael Woods is away on International duty with England's U17s.

After their wonderful win against Arsenal Reserves a fortnight ago, the Reserves sit proudly at the top of their division with four wins from five matches, whereas West Ham are second from bottom without any points after playing four games.

West Ham also include Scottish International defender Christain Dailly (who was late substitute in yesterday's game against Blackburn) in their starting line-up.

Young Miroslav Stoch from the Academy who has been scoring freely this season gets a place on the Reserves bench.